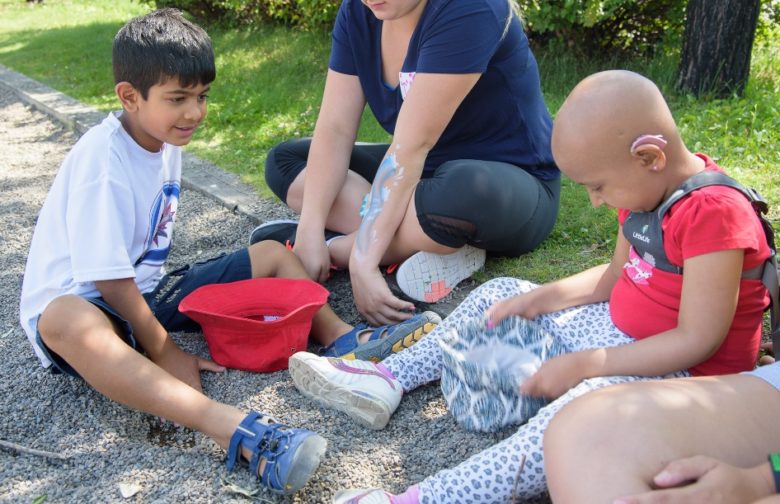 As a six-year-old boy, I had no idea of the severity and the stresses of childhood cancer. I believe I had a very skewed and sheltered perception of the reality of it. However, my childhood was nowhere near normal.

My sister Sofia was diagnosed with medulloblastoma, a type of brain cancer, when she was four years old. I was then six and in the middle of kindergarten. One of my earliest memories related to Sofia’s cancer was when she was at a soccer game. She fell and threw up violently. She didn’t stop for hours, and I could tell my parents were getting extremely worried. I can vaguely remember their nervous and stressed faces throughout the rest of the day and night. I remember that my dad thought it was a virus or infection, but my mom had a sinking, a gut feeling that it was something more. They ended up taking Sofia for an MRI, and after that, everything changed. From the perspective of a six-year-old, I had no understanding of the gravity of the situation, but still felt the impacts of all that was going on.

When I first saw Sofia in the hospital, she was unlike anything I had ever seen before. It was a blur of beeps, doctors, and tubes. I saw Sofia lying motionless in bed, and it kind of reminded me of the hospital scene from the movie E.T. I was appalled and didn’t know what to think. One of the most surprising things about Sofia was all the tubes and drains connected to her body. I remember my mom ‘feeding’ her through an NG tube, which I didn’t understand. I remember thinking, “Why can’t she just eat normally, and what is the purpose of the tube in her nose?”

Sofia also had a tube connected to her chest, which caused her pain. Mom would inject some sort of medicine through this, and even after the tube was taken out, there was a huge scar, which she still has to this day.

Next, Sofia underwent surgery to have the tumour removed. After the surgery, the doctors diagnosed her with something called posterior fossa syndrome. This resulted in her being unable to move, see, or function in any way. This was shocking as in my mind other children who had surgeries came out just fine. My parents were in disbelief and were confused as to why this had happened.

During Sofia’s treatment, we started to invest in physiotherapy and speech therapy. I vividly remember the therapists teaching Sofia basic speaking skills and basic vocabulary. I was confused as to why she had to relearn all these basic skills. In addition to this, she was always in a wheelchair, not being able to walk at all. The physiotherapists tried to help, but it was months before she could even walk with assistance. Sofia also had no hair, which was a result of the chemotherapy, and now as a seven-year-old, I found this so different from how I knew her.

After Sofia’s surgery, our home life changed so much. I would often wake up in the morning as a kid, to see my grandma waiting for me downstairs. She would tell me that my parents had gone to the hospital with Sofia again in the middle of the night. I would sometimes get frustrated that they were never around, and would always rely on friends, uncles, aunts, and others to look after me and drive me places. My parents tried their best to give me a normal childhood with sports and extracurricular activities, but it was extremely difficult and a huge challenge. They would constantly be at appointments or meetings for Sofia, all while managing their own jobs. In fact, it was too stressful that my mom had to take some time off work, so she could be with Sofia. I can only imagine the impact it had on my parents back then.

In the winter of grade 1, my parents announced that our family was going to go to Houston, Texas for a couple of months. This was because the chemotherapy was unsuccessful, and Sofia needed brain radiation to be completely rid of the cancer. My parents made it seem like a Christmas vacation and got me really excited for it. However, when we got there, it was the same as Calgary. Waking up to one parent with Sofia gone, staying in hospital waiting rooms for hours, and an overall sense of loneliness was ever-present. I remember waking up at 10 am and having to play by myself quietly because my parents and Sofia were asleep until 2 pm, as they were at the hospital late the night before.

I did make friends with some of Sofia’s doctors, and they were extremely kind and thoughtful. One of the doctors would always give me new puzzles to solve and talked with me every day. This went on for about a month; however, my parents then told me I was going back to Calgary for school. I was under the impression we would all go back together, but my mom, Sofia, and Sonya, who was only two at the time, were going to stay behind to complete the radiation. In all, I spent two more months in Calgary while the others were in Texas, and I was still confused as to why they didn’t come home. I remember celebrating my birthday in January, with only my dad, and FaceTiming my mom and sisters. I was overjoyed when they finally came home, but Sofia wasn’t the same. It felt like all the progress with speech and coordination she had built up over the past year was thrown out the window. It was like starting from zero again.

After the radiation was finally completed, and Sofia was deemed cancer free, there was a stage of pure celebration and pure joy. However, the true effects were slowly starting to appear, and it was a very difficult life, and nowhere near back to normal. Although Sofia was cancer free, the treatment had permanently damaged her brain, and so her struggles with speech and coordination were still present. She did physio every day, and we hired numerous therapists throughout the following years. She is still practicing to this day and is still working so hard at physio, speech, occupational therapy, and with her psychologist.

Sofia also received additional support through Kids Cancer Care’s therapeutic exercise program PEER. Kids Cancer Care has a Ph.D. exercise specialist who worked with researchers at the University of Calgary Wellness Lab and health care professionals at the Alberta Children’s Hospital to develop this exercise program especially for kids affected by cancer. It helps patients and survivors manage the immediate and long-term side effects of cancer treatments. Both Sofia and Sonya go twice a week and they love it because they get to have fun being active together, while socializing with other kids affected by cancer.

In terms of schooling, Sofia was supposed to go to school with me; however, as a result of her treatment, she had to attend Gordon Townsend School at the Alberta Children’s Hospital. It would have been impossible for her to attend a normal public school due to all the support she needed and because her immune system was so compromised by the chemo. From my point of view, I was disappointed that she wouldn’t be able to attend the same school as me and I didn’t understand that there was no way to make it to work.

In addition to all these things, lots of the initial support received during her treatment time began to change. In the beginning, there were always people around and in my house: friends, family, neighbours, with many dropping off meals and toys for me and my sisters, etc. (which was extremely helpful and appreciated). As a child, it likely helped to shelter me from the horrible reality of what was happening with Sofia. However, after her treatment, things changed and there wasn’t that same flurry of people around. For me, it was like people believed that everything was now all of a sudden better because she was cancer free…but that was far from the truth.

We did however find new ways to gain support, and one of the biggest ones was through Kids Cancer Care. The community of people there were relatable and considerate and helped my sisters and me create so many new memories. My first year at Camp Kindle was an amazing experience. I also remember things like going on the Polar Express, meeting the Flames Hockey team, and skiing at Canada Olympic Park with Kids Cancer Care. This year, I have joined the Teen Leadership Program and I am looking forward to the opportunities this program offers. Overall, the Kids Cancer Care community helped me feel like I belong, and also made Sofia and Sonya feel welcomed and happy as well.

Now, eight years since the original diagnosis, great progress has been made, and I am extremely proud of all the work Sofia has put in to get where she is today. However, there are some things that will never be the same again. She will most likely always have hearing, cognitive and balance challenges, she won’t grow much hair at all, and she may not gain much height. However, we can only hope going forward that lots of progress will be made, and she will keep improving, one step at a time.

Read the poem that Shaan has written for her sister Sofia below.

Battles fought, not one not two

Many more, definitely not few

Or can we extend

The lives of the people

Who suffer and suffer

When all seems lost

When all seems gone

What can one do

Evil and deadly a silent killer

A beast of the night, taking hearts and souls

The girl who was so nice and loved and sweet

Traveled across the world, hopefulness

Needles and medicine, oh how we care

Now after all of that nothing seems to negate the negative feelings of pain. Of anguish.

But hope can prevail, even in the darkest of days when depressions and despair are all one feels.

All the days and pain

From there it is bliss, the world is ours to conquer

Speech and steps follow, but it’s not the same

Thriving, and no more writhing

She struggles and stumbles but

Living life, without any vain

Grateful for the small blessings that came our way

We did it, she did it

We cling to hope the rest of days