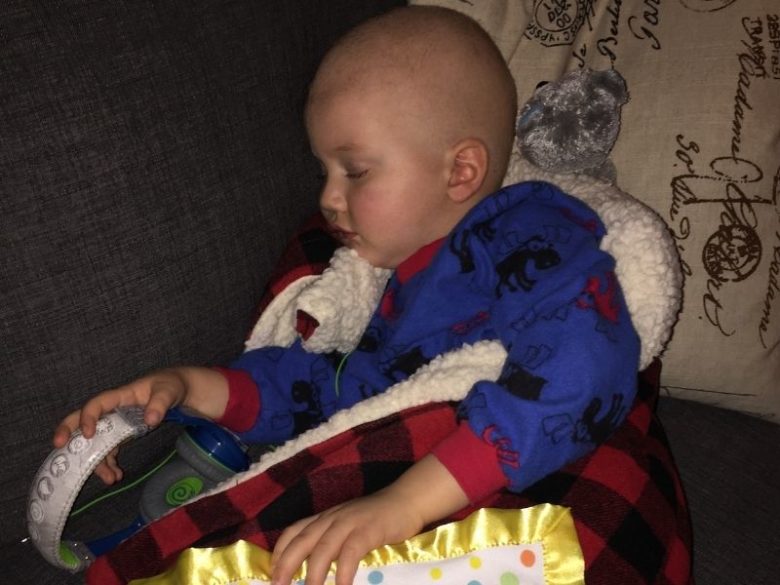 Sam’s battle with cancer started in October 2015. Sam jumped on his brother and got a bump on his face that just wouldn’t go away. We were fortunate that our family physician was suspicious, did some blood work, and diagnosed it as Leukemia.

This was such a scary time for us, made worse as it comes with such an overwhelming feeling of helplessness. As parents, we all would fight any battle on behalf of our children if we could, but with cancer, they are forced to fight. And they must endure all the terrible side effects of the strong medications and treatments necessary to save their life. Still completely in the depths of shock and fear we were told to check into the oncology department at the children’s hospital.

It is amazing to think back and realize that Kids Cancer Care was with us through our entire journey. We first met volunteers from this amazing organization in week one of living at the hospital. They provide pizza to the kids and parents who are forced to be in the hospital for long stretches. This gives the families something to look forward to, but also provided an opportunity to connect with other parents at the hospital.

Another of the amazing programs that Kids Cancer Care provides is Child Life specialists, who help kids deal with the anxiety and fear of having to face difficult surgeries and procedures. They provide dolls that kids can play perform the procedures on, like having a semi-permanent Intravenous access device (IVAD) installed because the kids will be connected to IV machines so many times during their treatment.

Also, while we were in the hospital for our first couple of weeks, the team from Kids Cancer Care sent volunteers to our house to fill the freezer with delicious and nutritious meals as part of a program called Cooking and Caring. It was so appreciated and exactly what our divided family needed with us parents switching in and out of the hospital every two days to have one parent at the hospital and the other at home with our other two kids. (Which we did for 200 days).

Most battles with cancer have similar themes of alternating low points, some days suffering the consequences of the cure are very difficult and then there are periods between harsher treatments where feelings of relief and hope are more prevalent. This was so very true when the oncology doctors explained that Sam had Acute Lymphoblastic Leukemia (ALL). If you have to get the unimaginable bad news that your child has cancer, this is the better kind. The oncology doctors and researchers have figured out how to cure ALL will few long-term side effects, 85% or more of the time.  This knowledge helped with our fear of the unknown immensely.

The first treatment phase is called induction where they try to get ahead of the cancer with some high-dose steroids and chemotherapies. After the worst of the negative effects from the steroids wore off, Sam was feeling okay and able to enjoy some of the programming that Kids Cancer Care provides.

This feeling did not last long. Cancer is a mutation to healthy cells and the aggressiveness of the cancer can be studied by testing the DNA of the cancer cells. Sam went from low risk, straightforward treatment to extremely high risk, very poor prognosis with this single test. This meant that the doctors had to abandon the established protocols and choose a more aggressive treatment to fight against this rare leukemia. Sam needed a bone marrow transplant. This constant roller coaster of increased fear started to take its toll, and this news was a horrible shock.

The science around the bone marrow transplant has been steadily improving for the last number of years, and we caught a break that Sam’s older brother William was a match and could be his donor. So, after the doctors at the children’s hospital, in comes our next hero!

Here is where the pattern of good news followed by bad news really starts to take on deeper and darker consequences. In the period leading up to the bone marrow transplant, children are extremely immune compromised. Sam contracted a severe cellulitis skin infection. It got so bad they were starting to test and treat it as if it was flesh eating disease. We have learned over the years, the more doctors present means the worse the situation is. Daily meetings between Oncology, Infectious Disease, and plastic surgery doctors is not a situation any family wants to be in. The pain from this infection was so horrible for Sam, that he was put on a morphine drip just to try to have a tolerable existence. He would cry and scream in pain with every diaper change which was made worse because the strong antibiotics he was on were causing him major stomach issues.

In order to get ready for the bone marrow transplant, the doctors have to zero out Sam’s old immune system which involves some very serious chemotherapies and two doses of full body radiation. Sam got to ride in ambulance to the Tom Baker Cancer Center (he liked that part). We as parents had to suffer watching him be sedated and packed into what was eerily similar to a coffin. Visually and mentally it was one of the hardest days of the process. This is also the day we had moved into the children’s hospital for what would be our longest continuous stretch. Every bone marrow transplant comes with a minimum stay of 45 days while the child’s new immune system hopefully takes hold and begins to function.

Thankfully Sam was so strong and he was more worried about his poor brother having to get a needle and small surgical procedure to enable the stem cell donation. As they wheeled William away for this process Sam brought us and some of the nurses to tears when he yelled after him down the hallway, “Be brave William, I’m so proud of you!”  Five hours of Scooby Do movies later the collection from William was complete, and super successful.

Infusion day was symbolic of the final road to recovery, but was quiet and calm. This was much needed as the effects of the bridging treatment to get to transplant were about to set in with the full force of their terrible side effects.

Day nine post-transplant mouth sores from one of the chemotherapies appeared, making it so painful for Sam that he couldn’t swallow or talk for four days. He was still able to show his inner strength with the odd smile, even through tears of pain.

After the mouth sores started to heal there was another short break of calm, and Sammy the Soldier had enough strength and will to finally sit up and paint. It was a simple thing, but after watching him suffer so much in literal silence, it was very meaningful and memorable. For the next little while, Sam started to heal.

That was until the worst April Fools Day we could ever imagine. On the night of March 31st, Sam developed breathing difficulties that got so severe he was admitted to the Intensive Care Unit. He had a lung infection so bad that he had to be intubated, restrained, and put into essentially a medical coma so he wouldn’t try to pull out the tube supplying his oxygen. This was the first time we had to seriously reflect on the fact he might not make it. Our oncologist was so supportive and amazing, but he also had to be honest. When we asked him what we were up against, he said “oncology patients in the ICU is not good. I hate that I have to tell you that there is a chance of mortality.”

For seven days Sammy fought for his life. He would regain a small amount of consciousness from time to time, so we could tell him how much we loved him, and he would reach for one of his favorite things, then the ICU nurse would push more sedation to get him back to sleep. This was a dark time. It is often the side effects of treatment, like compromised immunity to fight infection, that often takes cancer patients, before cancer does.

Thankfully his fledgling immune system and the medications were able to get him through the infection. Good news…. Immediately followed by bad news. Another life-threatening risk to bone marrow transplant patients is Post Transplant Lymphoma Disease. Which developed in Sam the same day they removed the breathing tube. The treatment for this involves an infusion that completely kills all the patient’s B-cells. These are the cells that develop the body’s immunity. To this day, they still haven’t recovered for him, resulting in the need for monthly infusions to support his immune system.

Sammy the Soldier’s fight against cancer was long and arduous, with periods of hope and optimism followed quickly by pain, suffering, and fear of the worst. Sam’s story is one of hope, perseverance, and strength. He made it. We are so lucky. Not all kids do.

Now Sam is healthy, happy, and doing Grade Four things. He is looking forward to his second stay at Kids Cancer Care’s Camp Kindle this summer! During the long phases in the hospital, having things to look forward to are so important. Camp Kindle was for sure one of these for Sam. There were others: Yoga and craft nights, Mother’s Day events, the Polar Express, Cool Yule theater tickets, and tutoring are all different ways that this amazing organization has supported our family through this ordeal. It is outstanding how they think of so many ways to support Alberta’s oncology community. Having subsequently learned of Kids Cancer Care’s investment in the research labs attached to the University of Calgary and ongoing donations to research to help save kids’ lives, it is with our whole hearts we would like to thank Kids Cancer Care for their ongoing work and unwavering efforts to support families like ours and the kids that have to face this horrible disease.

The Duffin family was featured in Leaving Thomas’ music video for “We Got This”, an original song inspired by Kids Cancer Care’s families.