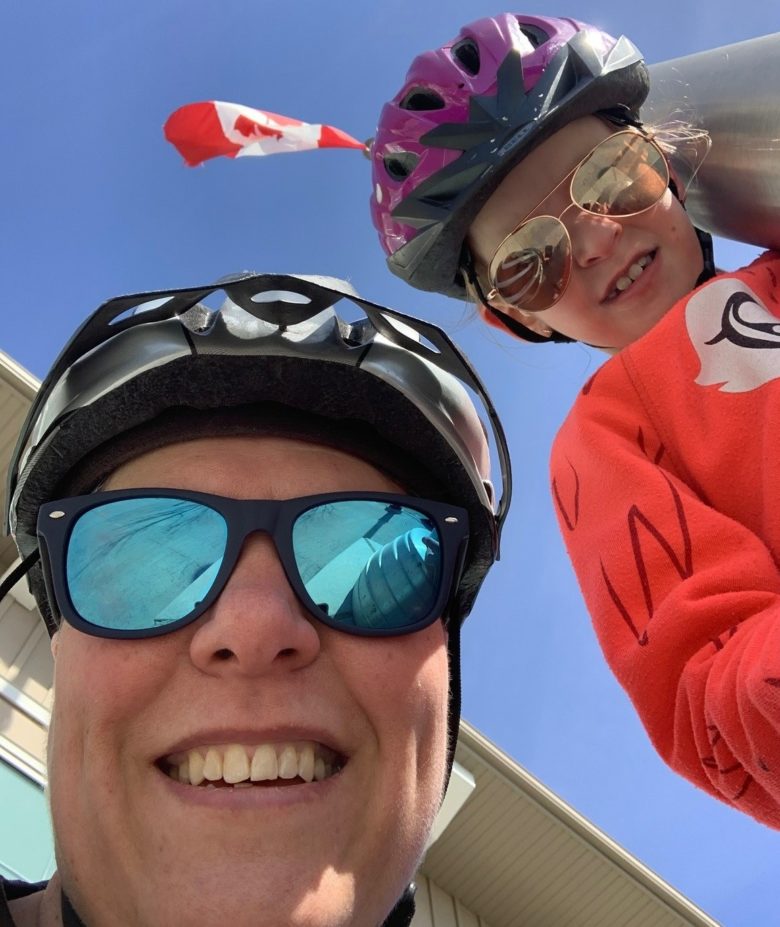 In Johannesburg, South Africa in the early ‘70s, a little girl named Walda was diagnosed with a brain cancer. She was five years old and her life was forever changed. Now, 43 years later, in another city, on another continent 15,815 kilometers away, a little girl named Nina was going the distance for Walda and children like her in the Kids Cancer Care Cycle Challenge.

Over the course of a week in 2020, 68 cyclists collectively rode more than 17,000 kilometres and raised $202,000 for Kids Cancer Care. Those numbers soared in 2021 with 133 cyclists riding 35,000 kilometres and raising $331,532. Their fundraising success was supported by generous sponsors such as Peloton Computer Enterprises in both years.

“What was nice about this event is you could participate from anywhere, at any time,” says Troy. “We were on a family vacation in the Okanagan and it was completely doable because I could spread the kilometers out over the week and still have time with my family.”

Nina’s mother Rensché Venter also appreciates the flexible format: “It’s really great to do something like this as a family. Nina was super excited about it. If the format is the same this year, we’ll be back.”

In July 2022, the Kids Cancer Care Cycling Challenge will be back for its third year, running for two weeks from July 9 to 23. Additionally, the first 100 cyclists to raise $1,000 will get to enjoy a fun-filled day at Camp Kindle on Saturday, July 23. For a $75 fee, they can also spend the night at Camp Kindle.

“A two-week event gives the cyclists even more time and flexibility to put in their miles,” says Renee MacTavish, events and community relations manager at Kids Cancer Care. “We added the Camp Kindle experience, because its the one thing the cyclists from Tour for Kids really miss. They miss hanging out together at Camp Kindle.”

“Being out at Camp Kindle reminds all of us why we’re cycling and why we’re fundraising,” says Christine McIver, founder and CEO of Kids Cancer Care who cycles with the Bow City Rollers in the event. “And camp is a lot of fun — especially after two years of COVID.”

Keeping the kids top of mind is also important to Rensché. Growing up in South Africa along side her cousin Walda, Rensché saw firsthand what cancer can do to a child.

When Rensché’s daughter Nina was a toddler, they travelled to South Africa to visit family. That’s when Nina first met her mother’s cousin Walda. Nina was two and Walda was 42. Although the distance between them was vast, when measured in kilometers and age, they bonded instantly. Developmentally, Nina and Walda were somewhat close in age as Walda had experienced significant physical and cognitive delays after cancer. The two of them had a lot of fun together on that holiday.

Events such as the cycle challenge offer Rensché teachable moments for her daughter. “I explained to Nina that we were riding for kids like Walda,” says Rensché. “I told her, ‘That’s what happened to Walda. She had cancer as a child.’”

As senior manager of MNP’s Enterprise Risk Services, Rensché also gives back in other ways, providing risk management services at no cost to Kids Cancer Care.

“Kids Cancer Care will always have a special place in my heart because of Walda,” says Rensché. “My mother and Walda’s mother were very close, so we saw each other often and we did a lot together. Walda had balance issues and was often falling. I remember her falling and smashing her head open. I understand the challenges of having a child affected by cancer and what groups like Kids Cancer Care can do for these kids and families.”

Thank you for going the distance for children affected by cancer. Your support makes Camp Kindle programs possible.

2 thoughts on Going the distance for kids with cancer