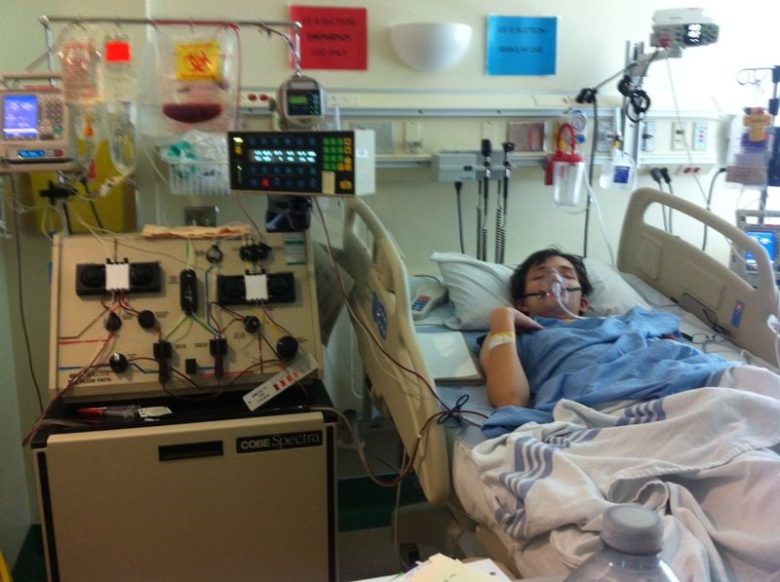 It was June 3, 2014, when we were blind-sided. Maddie, our 16-year-old daughter, had not been feeling well for a few days when she asked to be taken to the doctor. She had been vomiting with increasing regularity to the point where she could not even keep water down anymore. We left home mid-morning. Waits at the walk-in clinic led to waits at the Alberta Children’s Hospital. Waits for tests led us to waiting for results of those tests. It was around 11:00 pm when a nurse came and told us we were moving to another room. I asked why, and her response stopped me in my tracks. She said she would let the doctor explain. I remember saying out loud, “Oh, our lives are about to change.”

The doctor’s words were, “I have bad news for you. Maddie has a brain tumour.” I said, “Thank you.” Afterall, it WAS a relief to me to finally have an answer. We had been to the same ER just two weeks before to show the doctors that Maddie’s balance was off and that her gait was off. That day they had sent us home suggesting it was likely psychological in nature. So, to now be hearing a doctor have an answer made me feel thankful. Upon hearing my thanks, he corrected me, “No, this is not good news.” I said, “I know.”

It was conclusive, our lives were about to change.

That was the beginning and by the end, two years later, we would have a string of beads 20 feet and 3 inches long to show for the ordeal. The beads are given through a program called Beads of Courage through Kids Cancer Care. Each step of the way through childhood cancer is marked by a bead given to the patient. The beads are given to honor courage, strengthen resilience and affirm the journey through cancer. Maddie’s string tells the story of seven surgeries, five admissions to the ICU, 35 rides in an ambulance, 57 scans (including MRI, CT, and X-ray), and 146 days in hospital and many, many other events.

What her string doesn’t tell is the sorrows and joys along the way. It doesn’t tell you how it feels to have one kid diagnosed with brain cancer and one kid diagnosed with epilepsy in the same month. The string of beads doesn’t shock you the way it shocks you when a neurosurgeon tells you that the complexity of the case is a 10 out of 10 in his line of work. Her Beads of Courage doesn’t begin to describe the fear that comes with complication after complication that kept us hospitalized for 6 months when it was predicted she would be there for only a few weeks. There is no bead for when doctors say, “Maddie will likely never walk again on her own.” Her string also doesn’t tell you how hard it is to navigate treatment for Maddie who also has a type of autism that has made her so agitated, violent and aggressive her whole life that schools have not taken her since grade four.

She IS brilliant! If you want to know how brilliant she is, the answer is 133 on the IQ scale. She has read voraciously since grade one and ever since has read around 500 pages a day.  She loves everything from Judy Blume’s tales of Fudge and his family to Harry Potter to Kenneth Opel to Shakespeare. I remember the joy of hearing her laugh aloud as she read Chaucer, “the greatest English poet of the Middle Ages,” on the kitchen floor while I cooked dinner when she was just eight years old. Her love of learning was magical. She created worlds the likes of Tolkien’s. When she was creating her worlds, she would realize that every people group has a language, so she would write her own language. As she studied history, she would realize that her world needed to have a history written for it and seeing as most history involves some conflict, she would need to write about battles. But where would the weapons come from? She discovered that they would come from metals. Where do the metals come from? The answer to that would lead her to learn about geology and what kind of land formations indicate what types of metals would be found there.

It was a joy to watch her learn. But life on the spectrum would prove very frustrating to her. School would be near impossible. The frustrations that came from seeing the world in such a different way than most people would make the next years extremely difficult. If I use the words violent and aggressive, maybe you will begin to imagine what I have decided not to detail for this story. Maybe you’ll imagine her pain. Maybe you’ll imagine how hard it was for me to keep the balance between loving her and protecting all those around her from her violent outbursts. Maybe you’ll get a glimpse if I tell you that all the top experts from across Alberta were at just as much of a loss as we were as to what to do.

What we were about to learn through the grueling brain cancer treatment for Maddie is that good relationships are everything and that there is great value in the struggle.

During the early days after brain surgery, Maddie later told us, she did some hard thinking about her life. As she looked at her life, she realized she was now carrying around two heavy backpacks. One that held the pain from the past and one that held brain cancer. She knew it would be too heavy a load to carry both, so she decided to put one of them down. She decided she would have to leave behind the backpack that held the pain from the past. “Let it Go” from the movie, Frozen, would become her mantra.

We prepared the staff at Alberta Children’s Hospital for her potential outbursts. We educated them. We warned them of what might be coming. The staff, in their usual way, dealt with Maddie with the utmost respect and thoughtfulness. They went above and beyond their job descriptions as they always do in the care they gave both Maddie and all the other patients on the oncology unit. Somehow, whether for physiological reasons related to her brain or emotional reasons related to her care, Maddie was finally ready to open up to the idea of having good relationships. She allowed nurses and doctors to touch her. She accepted their help. At age 16, she was finally ready to love.

With the cancer diagnosis there seemed no end to those who were there to help her. The staff at Alberta Children’s Hospital was amazing. Same with the staff at Tom Baker Cancer Centre. Then we were introduced to Children’s Wish Foundation who cared so much that they sent our family to Ireland to buoy our spirits. Then we were connected to Kids Cancer Care who cared so much that they sent us to a production of A Christmas Carol and brought us meals. They even worked out all the details so Maddie could attend Camp Kindle, in a wheelchair, with an aid! She had never had the chance to do that in her whole life leading up to cancer. The support we were surrounded by made all the difference between, “I don’t think we can do this,” to “We came out of this better than we went into this.” The outpouring of love and care are what made all the difference. We are better for it all. All the good that came from those relationships made us appreciate the value of the struggle in life. Without the struggle we wouldn’t have those treasured relationships.

It’s been seven years since our family heard the brain tumour diagnosis. We seldom talk about all the deficits cancer and its treatments have left Maddie with. I can tell you she has learned to walk again, wobbly and unstable, but walking nonetheless, and that it took years to relearn to walk. I would also tell you that her right side is permanently damaged: complete hearing loss in her right ear and now she is left-handed due to her right hand being spastic. Her endocrine system that controls all her hormones is shot. We sure couldn’t have predicted all that cancer would leave us with. It was beyond hard. It is still hard. But we also couldn’t have predicted Maddie’s healed heart, her newfound trust in humanity, and her willingness to love and be loved. It has all come from the gift of people deciding to care for us. We made it through because of the love we received. It’s true what they say about life being unpredictable but that’s just as true for the good stuff as for the hard stuff. And life has made us very grateful for the good stuff that comes our way.