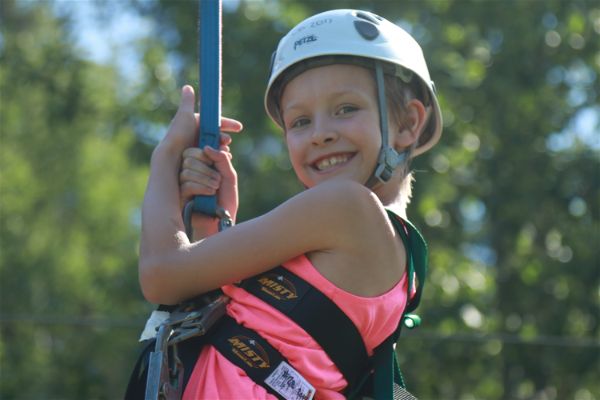 Thea is a girl who could best be defined by her exuberance for life and her enviable ability to see only possibilities — to see the wonder and awe that surrounded her each and every day. With curiosity as her guide and her infectious energy, she celebrated every occasion, big or small, every relationship, and every moment with a giggle and a Snapchat picture.

You could say Thea came into the world with an extra dose of exuberance and a greater share of resilience. But then again life would demand a lot more of our little girl. She would need these qualities in spades.

On June 20th, 2016, my wife Lesley and I were shocked and devastated to discover that, what we thought were growing pains in our daughter Thea’s right leg, were symptoms of a rare form of bone cancer called Ewing sarcoma.

Shortly after receiving her diagnosis, we were hit with more devastating news: the cancer had metastasized to her lungs, so began our cancer journey.

We were first introduced to Kids Cancer Care, while Thea was undergoing treatment at the Alberta Children’s Hospital. A place that came to be known at our house as the Lego hotel.

Along with Wednesday Pizza Nights at the hospital, Kids Cancer Care funds the Beads of Courage program there to help the children make sense of their cancer journey, recording every needle, X-ray, MRI, chemo treatment, surgery and hospital stay with a colourful bead.

Thea was incredibly proud of those coloured beads, each representing a medical procedure she’d been through or milestone she’d met.

Treatment was hard. Thea endured incredibly painful and exhausting days. Her optimism and strength took on superhero proportions as she readily traded hair for hats, school days for chemotherapy treatments and playground time for needle pokes.

Thea, more than anything, just wanted to be a seven-year-old, to participate and be treated the same. This, we quickly learned, is the underlying foundation of what Kids Cancer Care is built on.

Kids Cancer Care introduced us to SunRise, a day camp for kids, ages three to seven, that is also open to siblings. Instead of drawing attention to the limitations caused by cancer, this camp focuses on the imaginations and abilities of kids. At SunRise, Thea and her sister Brynn played with other kids and Thea didn’t have to answer questions about why she didn’t have hair or why she needed medicine. Every kid just understood.

After six months of treatment, including intensive chemotherapy and 35 rounds of radiation, it was explained to us that Thea’s lung tumours were not disappearing, but in fact, were growing.

A lung surgery came next as the cancer was relentless. Although Thea was fighting, we were not winning the battle.

We often describe Thea as the happiest sick kid you could meet. If she was scared or worried about her diagnosis, she rarely showed it.

She was determined to spend as much time as possible at school, where she dedicated herself to the magic of learning. Where there wasn’t a subject she wouldn’t tackle, a teacher she didn’t admire, and where she could foster her most loving and caring friendships.

In early 2017, the doctors encouraged us to make the most of our time, while she was feeling good, so we became laser-focussed on providing Thea the means to do whatever she could with whatever energy, determination and imagination she had. Denying the inevitable, we lived and loved each day.

Over the next few months, we made the most of family time together.

Thea was granted a Wish Trip, so she could live out her dream of staying in a princess-like castle in Ireland. There she kissed the Blarney Stone, rode horses through green pastures and filled her rubber boots with ocean water.

It was on the final day of our trip that she began experiencing some pain and a fever that was immediately investigated. Her health had taken a turn.

Within days of our trip, we found ourselves sitting with the palliative care team at The Rotary Flames House as our oncology doctors discussed Thea’s health and inevitable decline.

What we quickly learned in the days and weeks that followed was that the caregivers and volunteers around us would do everything they could to allow Thea to live as a richly, fully and as beautifully as she could, for as long as she could. The palliative care physicians expertly managed the delicate balance of controlling her pain, caused by the growing lung tumours, and ensuring she felt well enough to function coherently.

Kids Cancer Care gave our two girls the opportunity to go together to Camp Kindle, a sleep-away camp, nestled in the foothills. At Camp Kindle, Thea, like so many other children, was able to receive the necessary medical care and medication to manage her pain. She embraced Camp Kindle. The staff, nurses and leaders she met became instant family through their caring and devotion.

Thea was immediately drawn to the impressive high ropes and zip line course. When she inquisitively asked when they would be going on that, the response she got was that it was reserved for kids 12 years and older. This answer would be the counsellor’s only mistake.

She was determined to conquer that course and, in typical Thea fashion, she continued to persuade the counsellors. She was not going to let a little something like her age, size or cancer get in her way.

Understanding the true opportunity of Camp Kindle, which is to celebrate the resilience of the human spirit and give kids an opportunity to conquer obstacles they may never be able to do again, the counsellors went to work. After getting full permission from her parents and the nursing manager, the counsellors worked behind the scenes to make the necessary adjustments to the course and the harness for Thea. They even went so far as to convince a photographer, who was likely more intimidated than Thea, to harness his way to the top, so he could capture each moment.

At the end of the week, the counsellors presented us with pictures and a DVD of her conquest — each picture, capturing her smile and expressions of pure joy.

Thea approached the high ropes course the way she faced cancer, with tenacity, grit and pure determination. Her strength and positive attitude didn’t go unnoticed at Camp Kindle. At the end of the week, when it was time to say goodbye and hand out camp awards, Thea was most proud of winning the Best Big Sister Award.

At the end of that summer, Thea was honored to receive the very special Derek bead. This bead was created in memory of Christine McIver’s son, who at the age of nine, lost his battle with an aggressive brain cancer. Derek is the inspiration that drove Christine to create Kids Cancer Care 25 years ago.

We were touched to discover that Thea was the first ever camper to receive this special bead, which celebrates the gifts of determination, humour and perseverance — gifts that both Derek and Thea share.

In August, we faced another setback as Thea’s pain became uncontrollable. Despite what she was able to do, scans revealed that her cancer had spread to her spine. Once again, the treatment team regrouped, rallied and readjusted her pain management. This meant multiple pumps, lines and pokes into her body and five more rounds of radiation.

Amid all of this, Thea remain focussed on a few more things she needed to do:

For all of us dads, this gala is such a special night to share with our daughters, while they still think we’re cool enough to hang out with and they still laugh at our jokes. In 2017, just two weeks before Thea passed, this night meant so much more.

It represented her graduating from high school, graduating from university, getting married and every milestone in between, where we could have shared one more dance together.

I think we were the last to leave that night!

It seemed that although she was adjusting to her weakened condition and slowing stamina, her spirit, her energy and her love of life kept her going.

On November 10th, 2017, in a weakening state, Thea convinced Lesley and I to take her to school for the Remembrance Day ceremony, for which she had been practicing all week. No one would have faulted her for staying at home that day, but her maturity and empathy always evident, she did not want to let her classmates down.

With the help of our palliative care team, many who came to the school to help manage her medication, we watched Thea sing Let there be Peace on Earth at the Remembrance Day assembly.

That afternoon, too weak to play, she sat with her friends on the school playground for the very last time. Three days later, on November 13th, Thea passed away.

It is a surreal transition when you lose a child. Moving from the overwhelming outpouring of support, while your child is battling their illness, to the solitude and despair of grief.

This is again where we leaned on Kids Cancer Care.

My wife Lesley says it best, “The fear of every parent who has lost a child is that as time goes on their child will be forgotten. Kids Cancer Care does a lot to ensure that doesn’t happen and has a special night called Time to Remember.”

They help families dedicate time in September during Childhood Cancer Awareness Month to remember the children who have lost their battle with cancer. They help honor our children and raise awareness for those still struggling with cancer.

We recently had a chance to go back to Camp Kindle during Family Camp — back at the site of Thea’s high ropes conquest. As a family, we got an appreciation of how the counsellors, nurses and volunteers of Kids Cancer Care make Camp Kindle such a special place.

It was emotional remembering the girls as they led us around the camp, showing us their bunks and all the places they explored. Thea never questioned why she got to go to Camp Kindle, but only expressed disbelief that anybody wouldn’t want to go.

For us, supporting Kids Cancer Care is so important. It doesn’t only connect us as a family, help fund children’s cancer programs and childhood cancer research; it keeps us connected with Thea.

Each year, I am envious of the courageous stories we hear of kids who are enduring their treatments, overcoming their own obstacles and those who have conquered cancer. Some go on to become counsellors or volunteers at camp. I’d like to imagine Thea as a counsellor, encouraging another young child to complete the high ropes course.

Our family is grateful for the support we have received through the many individuals and companies that support Kids Cancer Care. Know that your donations will allow other families and children, struggling with a cancer crisis, to receive the much-needed support offered by Kids Cancer Care.

Whether you are reading this post as a parent, navigating an incredibly complex journey with your child diagnosed with cancer, a donor providing much-needed financial support to Kids Cancer Care or a volunteer dedicating your time and spirit to support these families, please let Thea’s story be a reminder to cherish your loved ones, find joy in even the most difficult of days and share Thea’s mission of love in the world.