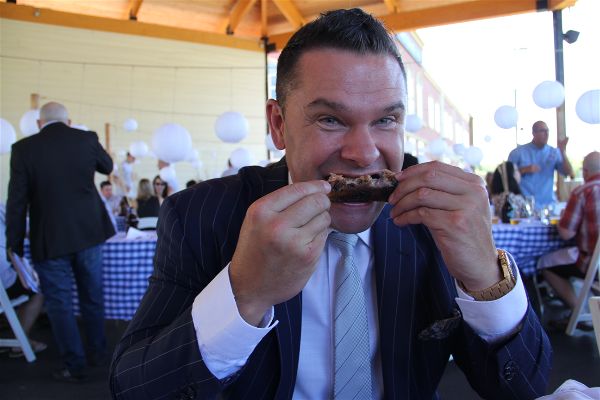 What’s better than a 20-hour slow-smoked brisket slider on a barley bun? A 20-hour slow-smoked brisket slider paired with the perfect lager. Nothing beats this combo — except for more ribs and sliders paired with more craft beer. Throw in sunshine and some live indie blues and you have the makings of a perfect summer day. This is Barley & Smoke: Grillin’ for a Cure, a fundraising event for children with cancer that brought together Calgary’s top 10 chefs and brew masters for the taste event of the year.

Local businessman Carlos Soares is the man behind the vision for Barley & Smoke. He recalls the time he was diagnosed with cancer as a young man, walking into the cancer clinic with his father — his dad’s arm around his shoulder. Now Carlos is the father and he finds it difficult to even imagine a similar scenario with one of his kids. It’s just too painful too entertain. That’s why Carlos decided to organize Barley & Smoke with 100 per cent of proceeds going to Kids Cancer Care.

“Helping kids battle cancer is very close to my heart,” says Carlos Soares, founder and president of Divine Flooring and a Platinum sponsor for Barley & Smoke. “I suffered from advanced cancer as a young adult and know first-hand the struggle and the challenges. I was able to overcome it and I don’t want any child to have to go through what I endured.”

Barley & Smoke was his answer.

For the cost of a $50 ticket, guests were free to sample 10 unique BBQ and beer pairings. A panel of celebrity judges selected the winners. While all the BBQ fare and boutique beer were more than delicious, the contest came down to four winners:

On display at the event, were five boutique reading forts, designed and built by individuals from the home building industry. This is where the guests could cast their votes. The forts were named after zodiac signs to evoke a starry night at Camp Kindle in the foothills. The crowd favourite was the Pisces Fort by LeAnne Bunnell Interiors and Unique Projects, who took the Best Fort prize.

With 550 guests in attendance and generous sponsorships from the Calgary restaurant, craft beer, home building, financial and legal industries, Barley & Smoke raised $55,700 for Kids Cancer Care. Factor in the extra $60,000 donated in labour and material costs for the reading forts and the total value tops $115,700.

“The generosity of spirit displayed by these sponsors feels like a miracle right now during this economic downturn,” says Christine McIver, founder and chief executive officer of Kids Cancer Care. “Times have been tough for everyone in this city and the way these industry leaders have pulled together to make this event happen exudes that can-do attitude that Calgary is famous for. It’s so refreshing right now and it couldn’t have come at a better time. We deeply appreciate it.”

On behalf of the children and families we serve, Kids Cancer Care extends a heartfelt thanks to the following companies that gave their time, talents and treasure to make the first annual Barley & Smoke a success.

Barley & Smoke tickets go on sale in the spring.