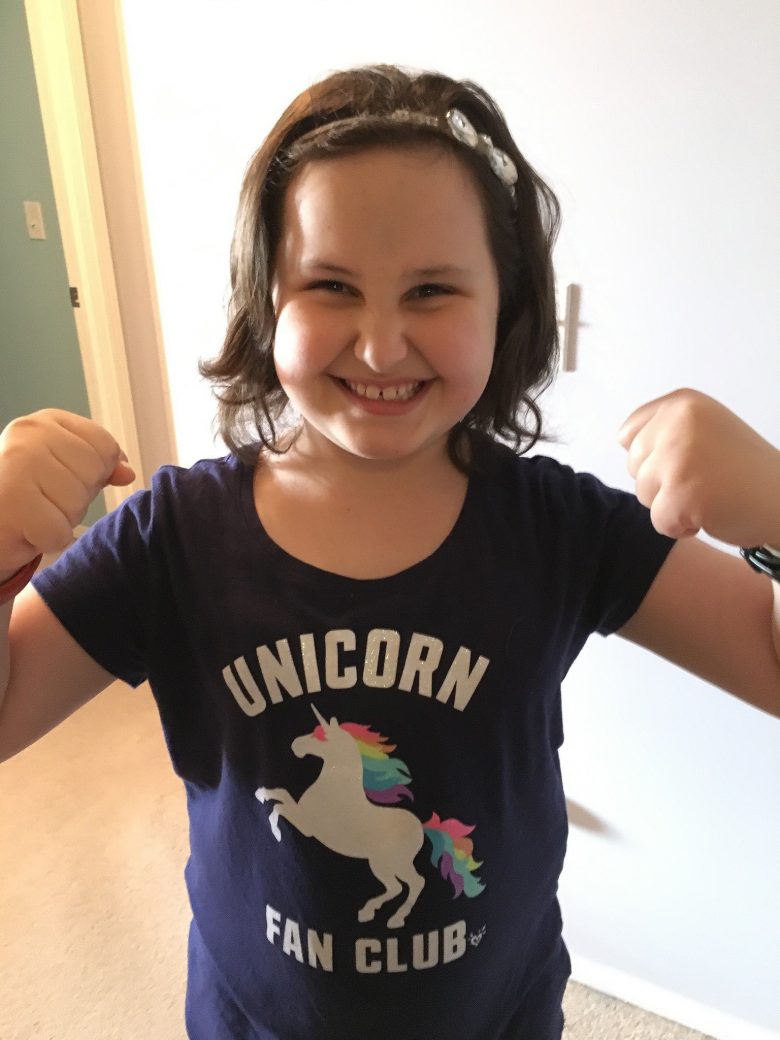 “When Laura was seven and had just started grade three, she started having problems reading her home reading. Like most parents, we thought that Laura needed eyeglasses. After work on Thursday, Sept. 17, 2015, we took her for an eye exam. The eye doctor was concerned with a flicker that he had noticed on Laura’s left eye so he made a referral to a colleague at the eye clinic at the Foothills Hospital. Because of Laura’s age, we were able to see the specialist the next morning.

After a very hard and long morning at the hospital, the eye specialist wanted Laura to have an MRI at the Alberta Children’s Hospital. It seemed like we were there within minutes. Lots of doctors came in to see Laura and she was asked to complete many neurological tests which she passed without problems. Within an hour of going to the Alberta Children’s Hospital, Laura went for her first MRI.

The results of the MRI were heart stopping. The vibrant and energetic girl who had passed all of the neurological tests had a tumour behind her eyes. Within minutes of the MRI being completed, a neurosurgeon told us that Laura needed a tube in her head or else she would not make it. The tumour was stopping the flow of her brain fluid so the tube was needed to stabilize her.

Less than 24 hours since her eye doctor found the flicker in her eye, Laura was whisked away to have her first brain surgery. It was crazy to think that she needed such a procedure. While Laura was being wheeled into surgery she was chatting to the neurosurgeon and nurses about where she had recently gotten her toe nails done.

When Laura emerged from her first neurosurgery she had limited sight. It was hard for us to support her with this limitation. Laura went into the surgery only struggling to read, now she was struggling to see things. Laura’s surgery was on a Friday afternoon so she recovered over the weekend while the doctors started to plan out her second neurosurgery. They needed to find out more about her tumour so they could determine the best treatment plan.

Laura who is usually a happy little girl was not thrilled about the tube in her head or that she had to stay at the hospital. Laura cried a couple of times while asking the nurses to let her go back to school. The staff remarked a number of times that even when Laura was sad she would use her manners when she spoke to them. As the weekend rolled by, Laura’s spirits raised and she started to be her happy and bubbly self again.

On Tuesday, Sept. 22, Laura went in for her big neurosurgery. The doctor was going to take a biopsy of the tumour so that a treatment plan could be created. It was the worst day of our lives. The surgery took most of the day. We were not given any rates on outcomes of her tumour or her surgery. We kissed Laura as she was wheeled into surgery not knowing if our daughter would come back to us.

When Laura woke up she could not see anything. As she woke up more Laura asked me “when do I get my dog?” I told her that her dog was at home and that when she came home he would be there for her. She replied, “No mommy, I get a special dog now. We learned about them in grade one.” At that moment I knew that Laura was fine. She had come through this surgery and she was going to be just fine.

Over the next week Laura remained in the hospital recovering from this major surgery. From the biopsy we found out that Laura has Pilocytic Astrocytoma. When we were told this we had no clue what the doctors were saying. What we found out was that this tumour was a slow growing tumour that had been there for some time. The doctors told us that the treatment plan was going to be chemotherapy. Up until that point I had never thought of the situation as being cancer. It was a lot to take in. My baby has cancer. Cancer in her brain!

The chemo plan was not as easy as just starting with the drugs. Laura had to go in for a third surgery. This time the doctors had to insert a port where her chemo would be administered. Once everything was in place Laura started her yearlong chemo treatment plan. This plan did not please Laura because it meant a year of being poked in the chest and hours at the hospital. All Laura wanted was to return to school and be with her friends.

Due to Laura’s vision impairment and heavy chemo schedule, she was unable to return to school. Laura was exhausted and still healing from three surgeries; not to mention all of the follow up appointments and MRI’s she needed. These busy months gave Laura’s school time to prepare for her return.

On top of all of the doctor’s appointments and chemo, Laura was learning to function with very little sight. Laura could only see some general colours and blobby shapes. She needed to learn how to function in the world being blind. In December 2015, just before her eighth birthday, Laura received her first white cane. Thankfully Laura took to using it instantly and was able to walk around and explore like any other child.

Laura returned to school part-time in January 2016. At this time her chemo treatments had reduced from weekly to monthly. Laura was happy about the increased breaks from being poked and had an increase in energy. Laura would need the extra energy to start learning Braille.

In February 2016, we finally got some fantastic news! The last MRI had shown a significant shrinkage in Laura’s tumour! It was the best news we had received in months! Laura was thrilled! All the pokes had made a difference though she still hated them. The rest of the year became a routine of monthly visits to oncology with lots of follow ups from her new eye doctor, endocrinologist and MRI’s every three months. Throughout the rest of the chemo treatment we didn’t see any further reduction in her tumour. As the year went on Laura started to get sick from one of her chemo medications. She was able to get through 12 out of the 13 treatments before having too much of a reaction to the drug.

In October 2016, the doctors reported that Laura had done amazing and that she would now only be monitored by oncology and MRI’s. Laura was thrilled, no more chemo! The following year went well. Laura felt great and was able to get back into some normal childhood activities, of course they were modified for the blind.

In October 2017, Laura went in for a routine MRI. When we went into her follow up appointment to see how things were going, we were told that all is stable and that the tumour looked the same as her last MRI which was three months prior. We asked if they could compare the recent MRI pictures with her MRI from a year ago. A couple of days later I received a phone call from Laura’s oncologist. She explained that she had taken Laura’s scans to the cancer panel to see what they thought. She reported that it looked like Laura’s tumour had become thicker and there was some debate as to whether or not it was any bigger.

The oncologist explained that the panel wanted to preserve what sight Laura had and that they were recommending another round of chemo. We agreed wholeheartedly. She began her second chemo treatment almost a whole year after she finished her first treatment.

Laura was not happy and she did not want to give up her hobbies and school activities for more chemo. She was in the school play and needed to go to the rehearsals. Additionally, she had also started raising money for the Canadian National Institute for the Blind’s guide dog program. She did not want to stop her crafting or selling her crafts. “People need guide dogs mommy.” With the help of Laura’s amazing primary nurse who helped schedule things, Laura was able to perform in the school play and she managed to raise over $1000 for the guide dog program.

Laura did not tolerate her new chemo treatment as well as her initial treatment. Laura started to lose her hair and she found herself more exhausted than she had ever been. In February 2018 we found out that Laura had little nodules showing up on her scans. The doctors were unsure of what they were looking at and they didn’t know if it was connected to the tumour. Things became clearer in April when they found that the nodules were connected to her tumour. It was terrifying to know that her tumour had really reared its head again!

Given the results of the MRI, the oncologist recommended a change in her chemo treatment. Laura had been on the therapy for months and the tumour was growing. We started the third treatment plan in May. Laura was excited because this was an oral treatment. Unfortunately, Laura ended up with even more side-effects on this third treatment plan. Laura was happy that her hair was thickening and growing back. However, in August she ended up with a minor toe infection. This toe infection slowly grew and spread and by September 2018, the infection became too much and Laura was hospitalized to get control over the infection.

Laura was now in grade six and she was not happy about missing school, especially because she missed band and Laura loves to play her flute. That is one thing that I can say about Laura, she does not let her blindness slow her down. We are pleased that Laura has had the opportunity to participate in many activities with Kids Cancer Care such as the panda brunch and attending camp programs. In October 2018, Laura was placed on her fourth chemo treatment plan. This is the plan that she is currently on today. On December 31, 2018, we received some amazing news. Laura’s tumour had shrunk! The year of growth was over! She is now attending school full time but misses’ classes for chemo treatments and other appointments. We are looking forward to 2019 being another year where Laura is able to beat back her tumour!”

One thought on Laura’s Story