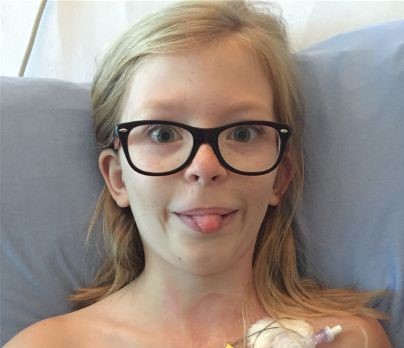 What started as a normal day on Friday, August 31, quickly become one of the worst in lives. Over the past few days our daughter Evelyn had been complaining of pain in her side, so I decided to take her into the Alberta Children’s Hospital. At worst, we thought, it might be appendicitis or something.

The doctor was concerned with Evelyn’s pain level, so he ordered an ultrasound. After the ultrasound, the ER doctor came into the room and sat me down. He asked if I could call my husband to come in. Then he told me they had found a softball-sized tumour in Evelyn’s abdomen. Thus began our journey with cancer.

When my husband arrived at the hospital, they sat us down to meet with an oncologist, who told us they were concerned that the mass was cancerous. Evelyn had a CT scan right away and we were admitted to the oncology unit overnight, while we waited for an MRI and further information. I don’t think any of us slept that night.

After the MRI, we heard the word cancer again and the doctor booked Evelyn for a biopsy. It was the September long weekend and school was supposed to begin on Tuesday. Evelyn was devastated at the thought of missing the first day of school, so her biopsy was planned for that Wednesday. The biopsy results came in a few days later, confirming that Evelyn’s mass was neuroblastoma, a type of cancer stemming from the adrenal glands. Further scans revealed that it was stage 4 and they suspected it had metastasized to her bone marrow.

At the recommendation of Evelyn’s surgeon and oncologist, we decided to do surgery prior to chemotherapy. Ev was in a lot of pain and they hoped that by removing the primary mass, they could ease the pain, which would give her a better quality of life going into the rest of her treatment.

Evelyn had the tumour removed on September 25. That day, they also inserted a Medcomp (central line) and performed four bone marrow aspirations. She was in surgery for just under eight hours — probably the longest eight hours of our lives. At the end of the surgery, our surgeon came into the room and called the surgery a huge success. They were able to successfully remove the entire primary mass! Unfortunately, the bone marrow aspirations, conducted during surgery, revealed that the cancer had metastasized to her bone marrow. Removing the primary tumour was only the first step in what will be a long journey towards getting our girl back to healthy.

Evelyn has currently completed six rounds of chemotherapy. She is an amazing kid! Although she struggles with vomiting and nausea and repeated infections, Evelyn smiles every day and, to help pass the time, she learns a new skill with each admission. During this time, she has learned to knit, mastered many a board games and perfected a series of magic tricks.

Prior to her cancer diagnosis, Evelyn was very active. CrossFit, running, hiking and bike riding were just some of the daily activities she used to participate in. She ran a 10-K race only weeks before her cancer was found. In an attempt to stay active and prove that cancer will not stop her, Evelyn has made a habit of doing burpees at some point during every admission. See Evelyn’s famous burpee here.

Right now we are preparing for what will be the toughest of Evelyn’s treatment. She is starting two rounds of high-dose chemotherapy, each with an accompanying bone marrow (stem cell) transplant. This phase of treatment will take approximately three months to finish. Following phase two of treatment, Evelyn will undergo radiation, followed by six months of immunotherapy. Our hope is that by December 2019 Evelyn will be finished treatment.

Charities like Kids Cancer Care mean so much to our family. From activities like enjoying Pizza Nights on the unit to riding the Polar Express and seeing A Christmas Carol, we are so grateful for the effort they put into providing moments that make our entire family feel special and cared for. Evelyn has a younger sister named Harper. At seven years of age, Harper has had to deal with some very big adult things and Kids Cancer Care has been so intentional in making sure Harper has had some amazing experiences and felt loved during this journey. Kids Cancer Care recognizes that cancer is something that impacts the entire family.

Evelyn’s care has meant long stays at the hospital, logistics and planning and some very tough days. This journey for our family is made hopeful by the insights of an amazing team of doctors and nurses and the ever-present support of friends and family. Every day, we make a choice to get up, love life and be grateful for each moment. It is odd sometimes to live in a place where my heart is simultaneously full and completely broken. This is not somewhere I ever imagined we’d end up. We have had to sit in appointments and hear unimaginable and earth-shattering, but as we have pieced together this journey for Evelyn and our family, we have learned who our tribe is. We are surrounded by the most amazing people, from friends and family to hospital staff and volunteers and local charities like Kids Cancer Care. While I hope this is a place no one ever needs to be, I can assure you that if you ever find yourself where we are today, it is survivable.