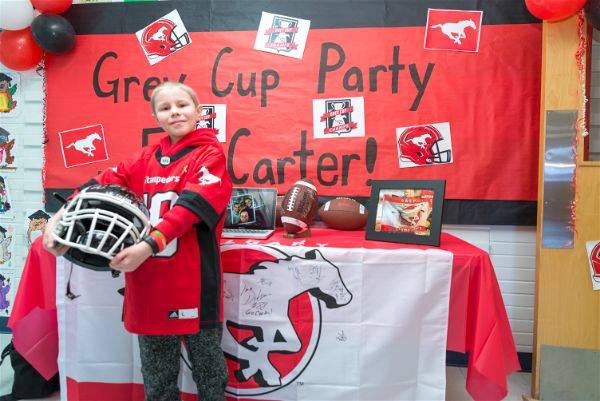 Carter Thompson isn’t your average Stampeders fan. He’s an extreme fan. Knowing what a tough year it’s been for Carter, we approached former Stampeder Stu Laird about getting some apparel for him. Little did we know, this simple request would assume epic proportions and become the stuff of dreams.

Carter is a nine-year-old boy who is one of the biggest Calgary Stampeders fans you’ll ever meet. He was born with a hereditary heart condition — the same condition that took his father’s life about year ago. As a newborn, Carter went into heart failure and his organs started shutting down. Carter received a heart transplant and for many years he was strong and healthy, but last summer, he began experiencing stomach and back pain. After a trip to the hospital, Carter was diagnosed with stage 3 non-Hodgkin lymphoma, a cancer that sometimes develops after transplant.

What followed for Carter were months of intense chemotherapy and isolation. Now in remission, Carter undergoes regular monitoring and follow-up with CT Scans, PET scans and oncology appointments. It’s been a rough road for Carter, but he’s true champion and approaches things with his usual good humour and sunny disposition.

Last December, Deb Osiowy of Kids Cancer Care approached her neighbour Stu Laird, who just happens to be a former Stamps player and one of the biggest-hearted persons you’ll ever meet.

“I told Stu about this sweet little boy named Carter and what he was going through,” says Deb, chief financial officer at Kids Cancer Care. “I told him how Carter was the biggest Stamps fan and asked Stu if he could help us get some Stamps apparel for Carter. It was Stu who took the ball and ran with it from there. I had no idea it would ever become so big.”

Although 2018 was a tough year for Carter, it was an auspicious year too, because in November, his favourite football team would win the Grey Cup. As a former Stampeder and community leader, Stu was granted access to the Grey Cup for a narrow window of time. When Deb approached him in December, he decided then and there to share that time with Carter.

“I really just wanted to make a little boy smile,” said Stu. “I never imagined it would become such a big event, but everyone wanted to do more, so we just ran with it.”

Working with people from Kids Cancer Care, the Calgary Stampeders, Carter’s mom and teachers at École Olds Elementary School, Stu arranged to deliver the Grey Cup to Carter’s school on one of the stormiest days of the year. Although there was a slight delay on the Grey Cup handoff in Calgary, because of weather, a convoy of vehicles left Calgary for Olds in the early morning of February 11. All for Carter.

The school gymnasium and hallways were plastered with red and black banners, sporting words of hope and encouragement for Carter: “Grey Cup Party for Carter.” “We’re on Team Carter!” “Fight for Carter.”

While the Stampeders and Grey Cup were certainly worth celebrating, it was Carter who stole the day.

“Carter, do have some good news to share with us?” asked Randy Kish, Carter’s gym teacher and a key organizer of the event.

“I’m on probation?” Carter looked up at his teacher quizzically, unable to retrieve the correct word amid all the excitement.

“Well, it’s kind of like probation,” Randy responded. “But I think you mean remission, right?”

Carter agreed, all smiles and nods. The crowd went wild, storming their cheers and applause.

Carter’s mother Tracy Thompson couldn’t be prouder of her son: “I asked Carter how he felt the other night about the Grey Cup coming and he said, ‘Mom, it reminds me of cancer. There’s a lot of battles. It’s like that game that you have to play so hard. Knowing I’m in remission is like winning the Grey Cup.'”

Hosting the Grey Cup at their school was a once-in-a-lifetime moment. It was one brutally cold morning when Albertans came together to show a little boy they care. It took a groundswell of community support and a bunch of big-hearted individuals who dared to do more – for Carter.

Thank you to the Calgary Stampeders and École Olds Elementary School for creating this magical day for Carter!