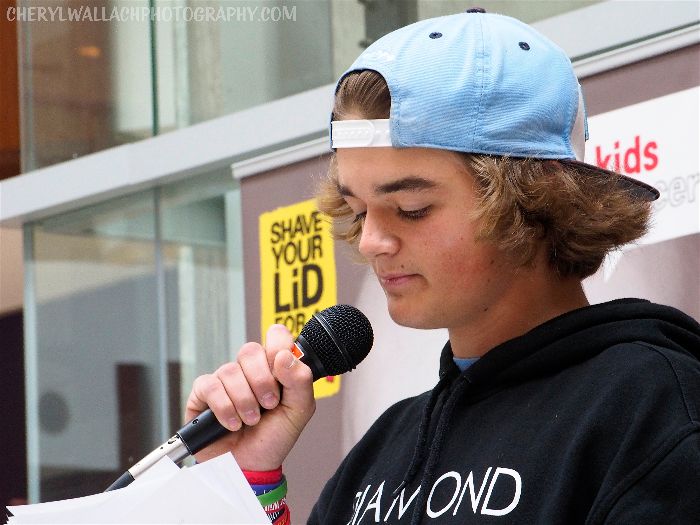 “To receive an award in the name of Terry Fox, who has impacted the lives of so many people, is an incredible honour. I was shocked when I received the call and incredibly humbled to know I had won it.” ~ Campbell Laidlaw

While most teenagers are procrastinating about doing their homework, Colette Benko and Campbell Laidlaw are out changing the world. Their academic, humanitarian and athletic contributions were recognized last spring when they each received a prestigious Terry Fox Humanitarian Award to pursue university studies in the fall.

“To receive an award in the name of Terry Fox, who has impacted the lives of so many people, is an incredible honour,” says Campbell, who is using his scholarship to earn a combined degree in business and kinesiology with an ultimate goal of becoming a doctor. “I was shocked when I received the call and incredibly humbled to know I had won it.”

Colette was equally surprised and honoured to receive the award in the Canadian hero’s name. “I was very surprised and honoured to receive the award,” echoes Colette, who is studying medical sciences at the University of Western Ontario. “Growing up, Terry Fox was one of my role models. I have always been inspired by his resilience and dedication. There are so many amazing youth across Canada doing outstanding work and each is having such a large impact in the community, I didn’t expect to win it actually.”

The Terry Fox Humanitarian Award was established in 1982 to honour the Canadian hero’s legacy while inspiring young Canadians to continue the work he started through the pursuit of higher education. Worth $28,000, the award recognizes young Canadians who demonstrate the highest ideals and qualities of citizenship and humanitarian service through their academic, athletic, fitness, health and voluntary community service. With that in mind, the Government of Canada laid the foundation for the scholarship fund through two major endowments: $5 million in 1982 and $10 million in 2006.

Since that time, hundreds of young Canadians, aspiring to make the world a better place, have received the scholarship. Colette and Campbell were among the 21 Canadians selected in 2018 to receive the prestigious award.

Colette and Campbell are both cancer survivors who have long been active with Kids Cancer Care and the larger community. As former teen leaders and spokeskids, they are both living the ideals of Terry Fox in their own way.

Your support played a key role in shaping Colette and Campbell into the leaders they are today. By supporting our programs, you provide young people from across Alberta with rich opportunities that safely push them outside their comfort zone and beyond their cancer experiences, so they can grow as individuals and reach their full potential.

“Kids Cancer care has helped to form me into the person I am today,” says Colette. “Without their support through my journey I would not have had the confidence to share my story. This has helped tremendously in finding my identity and how I could aid in the fight against cancer and advocating for pediatric patients.”

Campbell agrees: “Being a teen leader and spokeskid for Kid Cancer Care helped me develop from a shy kid into someone who is confident and loves to interact with people. I truly believe this experience has helped make me who I am today.”

Diagnosed with stage-four neuroblastoma at age two, Campbell was given only a five per cent chance of surviving. He endured repeated rounds of chemotherapy, surgery, bone marrow transplants and radiation. As a result, Campbell is hearing impaired today and has faced a lifetime of orthodontic issues – braces, implants and jaw surgery – but he hasn’t let this stop him from living a full, active life. He simply grew his hair long, so other kids couldn’t see his high-powered hearing aids, and hit the slopes to perfect his freestyle skiing skills. In the summer, Campbell perfected his golf game and became an accomplished golfer.

As a teen leader in our Teen Leadership Program, Campbell served as a role model and mentor to younger children with cancer, showing them there is life beyond cancer. He also demonstrated his philanthropic spirit by raising $2,500 to complete a humanitarian service trip to El Salvador, where he and other teen leaders from the Teen Leadership Program helped build homes for low-income families.

Representing Kids Cancer Care as our spokeskid in 2013 and 2014, Campbell helped raise much-needed funds and awareness for other children facing this disease. Quiet and unassuming by nature, he pushed beyond his comfort zone to excel in this role by repeatedly reworking and rehearsing his speech until he perfected it. His hard work paid off because more than once he received a standing ovation.

Campbell has big plans for life: “My goal is to use my combined degree in business and kinesiology as a stepping stone for medical school,” he says. “I would really like to have a business background, so one day I will be able to have my own practice.”

Colette also has ambitious plans for a career in the medical field and it’s her own experience with cancer that is her driving to help others with cancer. Colette was diagnosed with cancer in 2014, when she was 13 years old. For years, Colette had been a long-distance runner and a competitive Irish dancer. At the time of her diagnosis, she was preparing for the North American Irish Dance Championships and although she managed to compete that year, it would be the last time she ever danced. Sadly, Colette sustained damage to her femoral nerve during surgery and now dancing and running are out of the question for her.

Like Campbell, Colette served as an official spokeskid for Kids Cancer Care, inspiring audiences with her story of courage and hope. She also volunteered through our Teen Leadership Program, where she served some of our city’s most vulnerable populations. Colette later made a humanitarian service trip to the Dominican Republic, where she and other teen leaders from the Teen Leadership Program built a school for low-income families.

As a cancer survivor, Colette has faced her share of adversity, but she is determined to transform her own suffering into helping others. A bright and gifted student, Colette is determined to improve the lives of other children with cancer by pursuing a career in cancer research. If her past accomplishments are any indicator of her future success, Colette has a promising career as a cancer researcher ahead of her.

As a high school student, Colette worked as a research student in the lab of Dr. Aru Narendran at the University of Calgary. Under his direction, she led a research project that won multiple national and international science awards. More importantly, however, her research into neuroblastoma is showing promise beyond the laboratory in the real world. The drug she investigated is now going into a phase one clinical trial at children’s hospitals across North America through POETIC (Pediatric Oncology Experimental Therapeutics Investigators Consortium). Quite a feat for a high school student.

Designed to inspire great acts of citizenship and humanitarian service, the Terry Fox Humanitarian Award is tailor made for young Canadians like Colette and Campbell, who not only believe in a better world, but also strive to make it better.

Thank you for shaping tomorrow’s leaders.