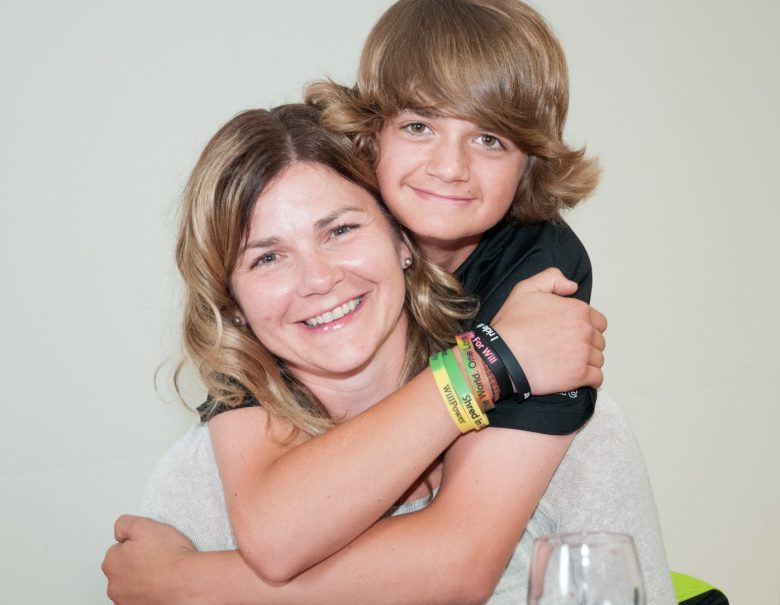 My journey with cancer began in April 2001. At first, there were very few signs that there was anything wrong with me. But one thing my mom and dad noticed was that I had trouble sitting upright in my car seat. Apparently, if the car seat wasn’t angled just right, my legs would fall asleep and I would start screaming. Mom and Dad thought this was a bit weird but they thought, “He’s two and can be a bit impossible.” They also noticed that I was always crying to be carried upstairs. They figured this was also typical two-year-old behaviour. They figured I was just a bit lazy.

About a week before my diagnosis, we were in Duchess, visiting my grandparents. Mom says I ran across the living room, fell and could not get up. I could not walk.

They took me to a pediatrician in Brooks, where they took X-rays and blood work. The blood work was all normal, so they gave the X-rays to Mom and she brought them to our family doctor in Calgary. He thought it might be synovitis because my sister Kennedy just had strep throat.

Another week of regular Advil doses, every four hours, went by. Mom didn’t want to just keep giving me Advil for pain, but if I didn’t get my regular Advil dose, I was miserable. There had to be something else wrong.

They decided to take me to emergency.

Mom still had those X-rays, so she took them with her. The emergency doctor knew there was a problem right away. A bone scan confirmed that there was a large grapefruit-sized tumour on the adrenal gland of my right kidney. There were also tumours in my femurs, pelvis and ribs.

On Monday, April 21st, 2001, I was diagnosed with stage four neuroblastoma—a cancer of the nervous system.

Dad says everything happened so fast in those first few days. My parents were called into a meeting room with nurses, oncologists and social workers and told very bluntly that I had only a five to 10 percent chance of surviving.

My cancer treatments started on Friday, April 25th and continued until August. I had seven rounds of chemo altogether.

In September, after I recovered from chemotherapy, I had surgery to remove the two largest tumours in my abdomen.

Six weeks later they started the bone marrow transplants. This involved wiping out all my blood cells with high doses of chemotherapy and replacing them with healthy blood cells. The chemo completely killed my immune system, so I had to be isolated for months. This was really hard for me and the whole family.

Mom says those transplants brought me as close to death as anyone could ever be. Seeing me go through this was awful.

Next, it was radiation.

Mom and I reported to the Tom Baker Cancer Center every morning at 7:15, so I could receive anaesthetic. They needed to be sure I wouldn’t move, so the radiation would hit only targeted areas, but who can trust a three-year-old to be still every day for a month?

The last part of my treatment was six months of Accutane. Mom and Dad figured this would be the easy part because we were at home and it was an oral medicine but boy were they ever wrong!  The dose was 100 mg a day, which is more than twice an adult dose.

When I was on Accutane, I was impossible to manage for two weeks of every month. But within two days of going off it, I was normal again. Mom said it was like riding a roller coaster for six months. It was pretty intense.

By August 2002, my treatment was complete. But we still went for regular appointments every six months for years.

I have now graduated to yearly appointments at the long-term oncology clinic. This is good news.

We were lucky to live in a city where there is such a strong focus on pediatric cancer. I received excellent care in Calgary and beat incredible odds.

Staying in Calgary meant we could be near family when we needed them most. Grandma Marian moved in with us to look after Kennedy, and Grandma Stephanie worked at Ronald McDonald house at the time. She made so many trips to the hospital because I had thrown up on my favourite blanket again, or because I wanted something to eat that they didn’t have at the hospital.

When my cancer treatments ended, I still had issues and a long road ahead. A fallout of the chemotherapy that saved my life was that I didn’t get all my adult teeth. I’ve had to deal with orthodontics, jaw surgery and braces. I recently finished getting all of my teeth implants put in and, for now, it looks like it’s the end of all those problems.

I also suffered hearing loss and wear high-powered hearing aids, which I will have for the rest of my life.

But even with all these issues, I’ve always lived a pretty active life. My passions are golf and freestyle skiing.

As soon as my treatment started, Kids Cancer Care embraced our family.

My sister has always loved camp and it has played a huge role in shaping who she is today.

While I tried to avoid anything to do with cancer, Kennedy embraced it. She has a special place in her heart for kids with cancer. So at 13, Kennedy embarked on her own mission to help. She shaved her lid for a kid and collected over $8,200 for Kids Cancer Care. I think that was pretty brave of her.

That February, after Kennedy shaved her head, we went on a family vacation in Europe and she wore her bald head proudly—EVEN when she was given keys to the boys’ bathroom.

It was the opposite for me. Cancer really upset me. For years after my treatments, I refused to leave my parents’ side or sleep in my own room. Camp brought back bad memories for me because when I was five, I lost my best friend, Carter, to cancer. I met him at camp. After that, cancer camp was scary for me. I didn’t want to go without him and I didn’t want to go alone, so I stopped going.

One summer, Kids Cancer Care chose me to be the official ambassador for the Shaw Charity Classic because I love golfing so much. I got to hang out with Fred Couples. He even bought me a new pair of Eccos and a new driver.

That was a really cool experience.

There’s lots of ways to be involved with Kids Cancer Care. Golf tournaments, head shaves, galas, summer camp, teen leadership and sporting events. It’s a great big caring community that welcomes everyone and meets them exactly where they are.

As part of that community, I also got to be a part of the Teen Leadership Program. We met monthly throughout the school year to develop and practice skills in things like communication, organization, responsibility and giving back through volunteer work. I learned the importance of volunteering to support causes in the community that are close to my heart.

Much of these experiences contributed to me being awarded The Calgary Youth Distinction Award for Volunteerism in 2017. I was also shortlisted out of thousands of people across Canada for the Terry Fox Humanitarian Scholarship.

I am now 19 and currently taking the year off of school and working. In the fall I will be attending the University of Calgary, taking a double degree in business and kinesiology. I also volunteered this winter with Canadian Association for Disabled Skiing. I taught a ten-year-old how to monoski.

I am pretty proud of where I am now, thanks in part to my cancer journey and the support I received from Kids Cancer Care, my friends and my amazing family.