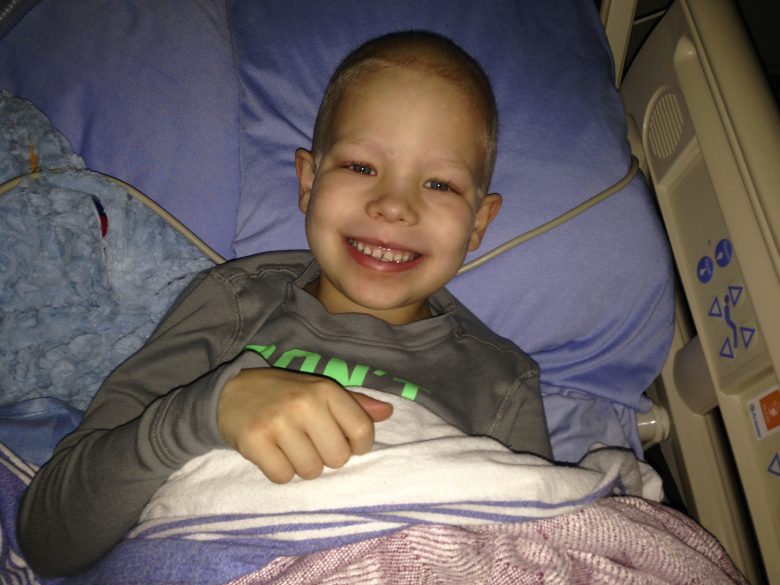 Mason’s journey began in December of 2013 when a large lump appeared on the right side of his neck. I will never forget how my stomach dropped when I saw this mass. It instantly scared me. I contacted my husband Diego at work, right away he could hear the fear in my voice so he dropped everything and we rushed Mason to the Children’s Hospital. They did a few tests, concluded it was simply an enlarged lymph node and sent us home with antibiotics. The next day, the hospital called with test results telling us he had strep throat, so they changed his antibiotics to something stronger. We thought this was a little odd as he had no strep throat symptoms, but we followed the doctor’s instructions.

The pharmacy had only half of the antibiotics we needed, so four days later we went back to pick up the rest. The pharmacist saw Mason’s lump, and alarmed at the mass, she first asked, “Is that what the antibiotics are for?” We nodded yes and she asked if it had gotten smaller. We responded, “No, it is getting a little bigger.” She directed us back to the hospital, because the antibiotics should have started to decrease the lump by then.

Back at emergency, we were told to finish the antibiotics as some take longer than others to take effect. We went home growing more and more anxious. That evening, Mason spiked a high fever and spent the night getting sick. In the morning, the lump was even bigger. We went back to the hospital for a third time that week wanting answers. Something was obviously wrong.

The medical staff at the hospital were stumped. All of Mason’s tests were coming back normal and he was feeling fine. We were referred to an ear, nose and throat specialist who eased our worry by telling us it was not the big bad ‘C’, but simply a swollen lymph node full of clear fluid. Because it was just before Christmas break, it was decided to re-evaluate the lump in the New Year. As we were putting our jackets on to leave, the doctor called us back into the room, offering to give us some peace of mind over the holidays. He offered to prove the lump was just clear fluid by putting a needle in the lump and extracting what was in the lump. So, four of us held Mason down. The needle went into his neck, and again but the doctor could not extract a thing. The room instantly went cold and tense. The doctor quietly walked me back to reception and gave us his fist appointment after the holiday break, while Diego snuggled with Mason, trying to calm him down.

Christmas was cautious. I know that may sound funny; we all tried hard to make the best of the holidays, but in the back of our minds we were terrified. That lump continued to grow and, as parents, you simply fear the worst.

January 8th, 2014 we met with the ear, nose and throat specialist again. He took one look at Mason’s neck and said it had to be taken out ASAP.

Two days later, on the 10th of January, Mason had the lump removed in day surgery, a procedure that felt like it took forever. At 2:41 pm we were asked to come into a little office where we were told they had performed a freeze screen test in the operating room and confirmed it was lymphoma cancer.

Mason was six that day in January. Telling a six-year-old he has cancer, what cancer is and what could possibly happen to him was an out of body experience for me. He’s six. How is this possible? He is only six. Our world spiraled out of control. The next eight hours were filled with meeting the oncology team, answering a lot of questions, hearing a lot of information I could not possibly understand and a lot of disbelief.

We were able to go home for a couple of days after that first surgery and before being admitted to the oncology unit. Mason had a lot of questions; we did our best to answer them. But mostly, we snuggled, cried and did our best to prepare for the battle ahead.

The next week, all the tests necessary to determine his complete diagnosis were done: bone marrow, CT scans, ultrasounds, X-rays, countless blood tests and a lymph node biopsy from a slightly larger node on the other side of his neck.

We finally received his complete diagnosis on Wednesday, January 16th.  Mason had stage 4 Burkitt’s lymphoma. He tested positive for Burkitt’s on both sides of his neck and 5 per cent in his bone marrow. Of course, we jumped on the computer and googled Burkitt’s. Pictures for Burkitt’s are shocking. Researching what our son had and what the treatment might entail kept us up all night. We cried harder and longer that night than any other time; not our son, not our six-year-old baby.

The next morning brought a new determination; there were no options in this journey. We had to win. And with that determination, Team Mason was born. Our family of four, our extended family and our incredible friends all became part of that team.

Mason went through five rounds of extremely intense chemotherapy. Each round brought on different challenges, but Mason never ever quit. He didn’t want to do it for one more second, but he never quit. He was aMazing. He is the bravest person I know.

The Alberta Children’s Hospital is such an amazing place. Not a place any family wants to know well, but we are so lucky to have it here in Calgary. We met many incredible people on unit one: doctors, nurses, families, volunteers and organizations. Being on that unit was humbling to say the least. It really grounded us and made us realize how fortunate we really were. When we first arrived, we thought our world was crashing down; however, when we found out Mason’s complete diagnosis and treatment plan, we were certain Mason was going to beat his cancer. We met so many other families who did not know their future. I can not possibly imagine their fear and pain.

We spent 60 nights at the hospital in unit one. It became our home away from home.

On May 14th, we heard the magical words every oncology family dreams of hearing: “Mason is in remission.”  He then went through his last round of chemo, like a champ. He strolled into that unit, said “Hi” to all the ladies in the nurses’ station, walked into his room and started to set up his bed and room the way he likes it. Through that week, he showed everyone his magic tricks and told them all his jokes, something he never did in the previous rounds. He was in a good space and knew what to expect.

On May 21, 10 days before his seventh birthday, he had his broviac line removed. Forty eight hours later, he was able to lay down in a bath for the first time in months. He lay in that tub until the water went cold. I will never forget the look on his face that day. There was so much peace.

We have spent our days since then trying to find our new normal, finding joy in every day. Although that year was the worst year ever for us, we really are the lucky ones. Our family is whole and we count our blessings every day for that.

One of our normals includes being part of the Kids Cancer Care Foundation of Alberta, an organization we are so lucky to be part of. They include us in so many amazing activities and events, but the very best one of them all is Camp Kindle. This past summer our boys were able to go to camp again. Bennett and Mason LOVE camp. They meet kids who know exactly what life with, during, and after cancer is like. They meet lots of kids and quickly make life-long friends. They swim, hike, sing, laugh and have genuine fun.

Diego and I have also been to Camp Kindle ourselves, once for Family Camp and once for Survivor Day. What a magical place. The peaceful environment overtakes any stress or outside noise in your head. If you ever get a chance to visit, go. You’ll know exactly what I’m talking about.

Kids Cancer Care isn’t just about the delicious pizza they deliver every Wednesday on the unit at the hospital and camp though. This incredible organization has done so much for our family. They filled our freezer with delicious food when Mason was in treatment. They include families in so many awesome Kids Cancer Care events — theatre tickets, sporting events, going to the North Pole on the Polar Express, galas, even golf tournaments.

Meeting other families who have experienced a lot of what we have gone through is also something we truly cherish. We have become part of this incredible family none of us really wanted to join, but we all feel so lucky to be part of. Kids Cancer Care also always include siblings, which is so very important because brothers and sisters go through the horrors of the cancer journey too. They witness many things kids shouldn’t see. Bennett was with his little brother every step of the way, holding his hand and encouraging him every day. Bennett was Mason’s biggest fan. Mason is lucky to have such an amazing big brother.

Another reason we love Kids Cancer Care so much is that they continue to keep us part of the programs and activities even after treatment is over. They know that even when chemotherapy, radiation or transplants are done, our journey along the medical path is far from over.

Hopefully there will be a day in the near future when pediatric cancer is extinct, but until then, organizations like Kids Cancer Care need your support to help families like ours to find peace, joy and love again during and after the horrific diagnosis of childhood cancer. We truly don’t know where we would be without their incredible support system.