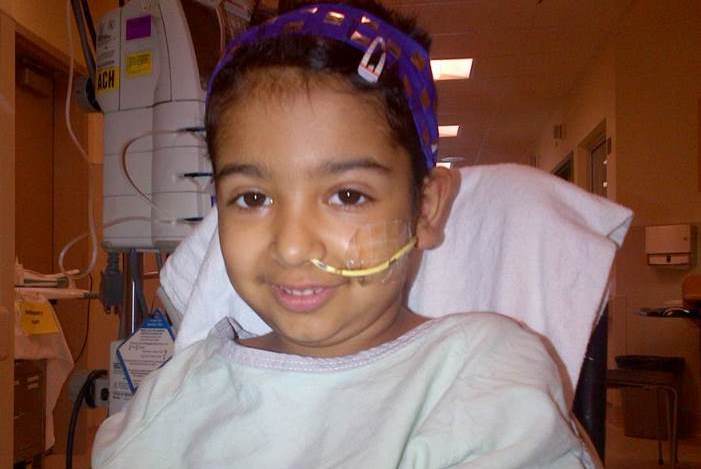 Our journey began more than two years ago now, when Sofia was still four years old. The memories we had made until that point were really blissful, and when I look back at them now, they almost seem like a fairy-tale.

Sofia was starting to blossom into a beautiful and caring little girl. She was always happy to play with her big brother Shaan and was already showing an incredibly nurturing and loving nature with her younger sister Sonya, who was two at the time. The lovely and delicate Miss Sofia was very sensitive, and was actually afraid of Santa Claus the first time he came to daycare, although she conquered her fears the following year and was able to sit on his lap without crying.

Then one day at a soccer practice, Sofia stumbled and fell, but what was unusual was she began to vomit. We were reassured by many that day and in the following weeks that her symptoms were not that unusual, given that there were viruses circulating and that the chances of them representing something more sinister were low. Perhaps I was in denial, but I tried to rationalize these events each day after that first fall. Being physicians, both myself and my wife Shelly, recognized that there were other possible explanations, and while Shelly was pushing for more investigation, I tried to play the reassuring father and husband role, hoping and praying that the symptoms would resolve.

But they didn’t. And even on the day of the MRI, when she was still able to do a somersault in gymnastics and after being examined by pediatricians with absolutely no abnormal findings, I felt confident that they were going to once again reassure us that everything was fine and there was nothing to worry about.

I will never forget that moment, coming out of the MRI suite when the technician directed me toward a room where Shelly was sitting, waiting for me to return. Shelly had already been devastated by the images and what the radiologist had said. The images revealed a massive brain tumour, which we later confirmed as a group 3 metastatic medulloblastoma – one of the worst and most aggressive forms of childhood brain cancer. Our world came crashing down in an instant. While I am not a neurologist or oncologist, after seeing the images myself, I knew that life would never be the same, and that Sofia was destined for a long and painful journey that was only just beginning.

What followed was a whirlwind of events, many of which I have blocked from my memory, I’m sure as a defense mechanism. After the emergency surgery to remove the bulk of the primary tumour, Sofia suffered from posterior fossa syndrome, or cerebellar mutism. This meant that she could not move, talk, walk, or even see to interact with us.

She must have been so terrified in those initial days, to wake up in that state, with tubes all over, not being able to do anything but cry. Meanwhile we had to make life-altering decisions about further treatments with chemotherapy and radiation, while trying to help her rehabilitate and learn how to move again. She did slowly start to recover, and I remember that it was on Father’s Day on the oncology ward when I was pushing her around in a wheelchair that she started to show signs of movement again – the best Father’s Day present I could hope for.

Over the next six months, we struggled through one of the most aggressive chemotherapy regimens possible in the hopes of eliminating the cancer so we could minimize craniospinal radiation, the side effects of which we had researched in excruciating detail. We travelled to Houston to pursue proton radiation and were hopeful that we could overcome the cancer with this final leg of therapy with a low-dose approach. Unfortunately, Sofia didn’t seem to be able to catch a break. The cerebrospinal fluid still showed cancer cells even after the ‘atom bomb’ of chemotherapy she had suffered through. This meant we had no choice but to give her the high-dose of radiation. The radiation caused significant cerebellar and further brain damage, and this has affected many different functions that will remain significant issues for the rest of her life.

Throughout all of these treatments, Sofia seemed so brave, strong, and accepting. Our hearts hurt with every needle poke, NG tube, and toxic therapy she received, but she endured. And although she has had a number of complications since, she has maintained that lovely, delicate, and caring charisma that she has always had, and that draws people to her. The challenges that she has been left to deal with include hearing, balance, motor skills, speech, and cognition.

Still, she loves going to school and is in grade two at Briar Hill. She has become somewhat of a celebrity at her school, and this was evident at the Kids Cancer Care Shave Your Lid for a Kid® school fundraiser last spring, which raised over $17,000 with many students and staff at the school taking part.

There have been many people and organizations that have played a helpful part in getting our family and Sofia to this point, but Kids Cancer Care certainly is unique.

Our journey was extremely difficult at the beginning, and some people in this room can probably relate to it – the weeks and months spent in hospital, trying to balance the needs of a two-year-old and six-year-old, while doing chemotherapy, watching a delicate and defenseless child suffer through the adverse effects of therapies, moving the family to a different city for treatment. We were so thankful and felt blessed to have the support of many friends and family in that acute phase, who helped look after the kids and bring us meals among many other things.

And Kids Cancer Care was there from the beginning, with Pizza Nights on the oncology ward, and has been there ever since. They seem to understand that dealing with a disease like this is a long-term issue for the family, and that support is really very important for many months and years after a major event like this transforms a family.

It has meant a great deal to our family to attend Kids Cancer Care events, from Camp Kindle in the summer, theatre nights, and to the Polar Express train ride in the winter. They even helped Sofia go adaptive skiing last season at COP, while her brother and sister were able to ski during Family Ski Day.

These kinds of events give our family a sense of belonging, and I think it helps our kids feel that there are people out there who do understand a little about what it’s like to go through what we have. They help us to cherish every day that we have with Sofia, and make new memories with each one.

With all of Sofia’s challenges, programs like PEER and the Education Support Program are outstanding resources that are helping Sofia on her long road of recovery. PEER provides customized exercise and physiotherapy sessions to patients and survivors like Sofia, helping them to increase their strength, balance and mobility. Sofia was also recently matched with a tutor through Kids Cancer Care’s Education Support Program, which will help Sofia build essential skills throughout her primary and secondary school years. These programs need ongoing support, and even our son Shaan got in on the act by contributing his eighth birthday party proceeds to Kids Cancer Care this year.

We are really very grateful for all of the volunteers who help us participate in these events. We are also very grateful to all of the people who support Kids Cancer Care with financial gifts. We thank you for your support of this fantastic organization that has meant so much to us, and want you to know that your help and involvement in Kids Cancer Care has been invaluable for many families. Your generosity and kindness will undoubtedly be felt by many in the future. Thank you.