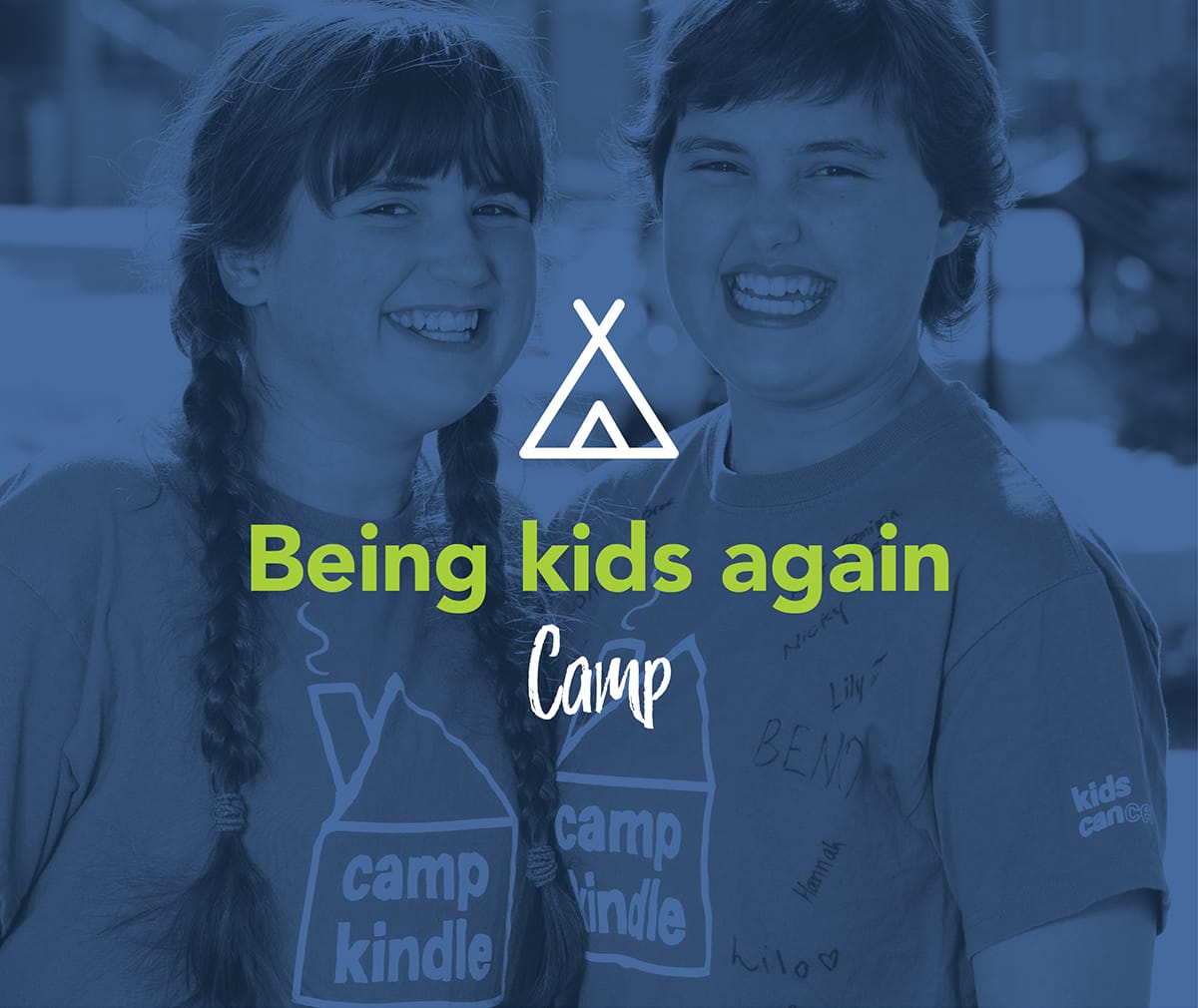 “When we finally made it to the clinic and sat down, Lily looked at a poster on the wall and saw the word cancer. She looked at me and said, ‘I have cancer! I am going to die aren’t I mom?’” — Michelle, Lily’s mom

Lily and Macy are as close as two sisters can be, and yet, they are both so refreshingly individual.

Lily, who is now 15, loves animals and the outdoors. She especially loves bears and plans to work with these misunderstood beasts when she grows up. One of her fondest memories is visiting the Discovery Wildlife Park in Innisfail, where a bear cub nibbled on her braids.

Macy loves arts and crafts. At age 12, she’s already an accomplished knitter and weaver. All smiles and little-girl giggles, Macy figures she’ll be a hobo ostrich farmer or something like that when she grows up.

When Lily was diagnosed with leukemia in January 2018, Macy was sick with a cold and unable to visit her in the hospital. Ever creative, Macy found the perfect solution. She printed off a large photo of herself and gave it to her parents to pass on to Lily. This way, she could be at the hospital too.After a long drive into the city from Black Diamond, Lily and her parents Jeff and Michelle Richardson, arrived at the Alberta Children’s Hospital. Earlier that morning, the doctor told Jeff they thought it was leukemia and had asked him to bring Lily to the oncology unit immediately. At the time, Lily didn’t know what oncology meant.

“When we finally made it to the clinic and sat down, Lily looked at a poster on the wall and saw the word cancer. She looked at me and said, ‘I have cancer! I am going to die aren’t I mom?’” says Michelle. “That was difficult to hear, but I told her we should wait to hear from the doctor himself. I guess I was hoping we wouldn’t have to hear those words.”

Much later, Lily confessed to her mother that she was secretly writing her obituary in her head, while waiting for the doctors to arrive that morning. “She was dividing up all the possessions she’d gathered in 13 years of life,” says Michelle. “She was sure she was going to die.”

It wasn’t long before the Richardsons were comforted by the news that Lily’s cancer, acute lymphoblastic leukemia, had a 98 per cent survival rate. If there is such a thing as hitting the cancer jackpot, they had just hit it.

“I knew we had a fighting chance and this wasn’t a death sentence,” says Michelle. “And I knew Lily was going to be okay too. When filling out the whiteboard in her hospital room, she wrote pig Latin for language spoken. Her humour was still intact and that would help us get through this.”

Still, emotional pain and loss, when and how it hits, is often unpredictable. At one of the meetings with Lily’s medical team, Jeff broke down and cried when they referred to Lily as a high-risk leukemia patient. Michelle went into overdrive — into a head space she calls the hyper-focused zone. As the doctors explained Lily’s diagnosis and treatment plan, she mentally juggled questions about Lily, her fencing competition, her spring sailing trip, the family schedule and how everything would change. Then, without missing a beat or a bit of information from the doctors, Michelle passed a box of Kleenex to her husband and continued to take it all in.

Michelle’s time to cry would come later: “Somehow it was thinking of Macy at home, wondering what was going on, that really made me cry,” she says. “As sick as she was, Lily was part of it all. She knew what was going on, but Macy just had to guess. After five days, Macy was finally well enough to come visit. She cried that night when Lily left the room and asked me if Lily was going to die.”

Michelle recalls another moment when the weight of reality hit her hard: “Coming home from the hospital was a mixed bag of emotions. I so wanted to be home, but was scared to leave the security of the hospital staff. That first trip to the pharmacy was when I broke down after the pharmacist asked me why I was getting this prescription. I had to say it out loud, ‘My daughter has leukemia!’ Those were hard words to say.”

There were many ups and downs ahead for the Richardsons. Lots of sacrifices were had by all.

Both Jeff and Michelle are teachers and, at different times, they both took a three-month leave of absence from work. Aunts, cousins and sisters helped out by preparing meals and caring for Macy, while Jeff and Michelle were at the hospital.

Lily missed nine months of school and would later spend many lunch hours in the classroom, catching up. She has also had to take a hiatus from competitive fencing and isn’t able to work at the petting zoo because of her compromised immunity.

Still, with all the love and support they received, the Richardsons consider themselves fortunate. Michelle credits humour for getting them through the journey to date. The lively karaoke sessions they shared on the road, when coming in from Black Diamond to Calgary for treatment, also helped. And while the frequent visits to Red Lobster for Lobster Fest were tough on the family finances, they gave Lily something to look forward to, especially when she was on prednisone and had an insatiable appetite.

Thanks to you, Kids Cancer Care was also a beacon of hope and normalcy for the Richardson family.

“The girls were able to go see the pandas at the Calgary Zoo,” says Michelle. “This wouldn’t have happened without Kids Cancer Care because Lily can’t go to places that can compromise her immunity. Both girls went to summer camp and had a great time. In November, we went on the Polar Express train ride. That was a memorable night. Jeff and I even got to spend a night with other parents at a cooking event! It was great to meet other parents. We could all speak the same language and not have to explain a thing! These events have been a blessing to our family! A bit of normalcy in a not so normal life.”

At Camp Kindle, Lily loved the hiking trips, the out trips, SunSeeker Cabin and the Reflection Garden. She also fondly remembers the whiskey jacks trying to steal her toast in the morning at the SunSeeker Cabin. Macy loved the arts and crafts, the counsellors and the gluten- and dairy-free food at camp.

During one of her arts and crafts sessions at Camp Kindle, Macy painted a scarlet-coloured flower on a rock. She later used the rock to play a little game with her sister, secretly passing the rock to Lily at mealtimes in the dining hall. Lily in turn would pass the rock back to Macy at the next opportunity. This clandestine routine went on for a while. It was their private little thing and, when questioned, the girls couldn’t really say exactly what it meant or why they did it.

Maybe it was a tangible way of preserving their bond as they each explored their newfound independence in the new world of camp and the strange new world of childhood cancer. Whatever its purpose, its message seems clear. Wherever time or cancer should take these sisters, they would be each other’s rock. They would forever be sisters, forever bonded by their love and a tiny scarlet flower painted on a rock from Camp Kindle.

Thank you for making camp possible for Lily and Macy and for helping them to create memories of a lifetime at Camp Kindle.